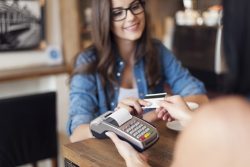 We all have probably noticed by now the chip readers that have been installed at most retailers. Many people complained in the beginning that the transaction processing time has increased. Due to that longer transaction time, we all asked why the change?

We were told by credit cards and bank institutions that these new chip cards or EMV cards, will reduce counterfeit credit card fraud and protect consumers from identity theft.

Chip cards and readers started appearing in 2015, and since then, over two-thirds of retailers in the US have chip readers. Visa had reported that credit card fraud is now down 75% from what it was in 2015 before the chips were introduced.

Chip technology makes counterfeiting extremely difficult. With the old stripe system, all necessary information is stored on the stripe and is very simple to make identical copies. EMV chips, however, communicate directly with your bank institution as opposed to the card reader itself. Each transaction generates a unique code that cannot be re-used and that makes stolen information useless in future transactions.

Given that Americans have racked up almost $1.04 trillion in revolving debt, most of which is credit card debt, credit card fraud will continue to be a tempting target for criminals. If your debt is contributing to the national revolving debt total, reach out to your local Stockton bankruptcy attorney.