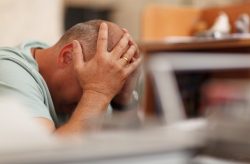 (1) is or has been a debtor under this title or a debtor or bankrupt under the Bankruptcy Act;”

(2) has been insolvent before the commencement of a case under this title or during the case but before the grant or denial of a discharge; or”

(3) has not paid a debt that is dischargeable in a case under this title or that was discharged under the Bankruptcy Act.”

Section 525(b) makes it very clear that you should not lose your job as a result of filing bankruptcy. You might still worry that an employer or prospective employer will take adverse action. What I often tell people in that situation is to imagine that two people apply for the same job. The only difference between them is that one filed for bankruptcy and has no debt and the other did not file for bankruptcy and has $25,000 in credit card debt. If the employer is thinking logically, the employer would rightly conclude that the person with no debt will be more focused at work and be under less financial burden. As you can see, bankruptcy should actually help your job performance by giving you a fresh financial start.

I once had a client come to me who was behind on his mortgage and his home was on the verge of foreclosure. He was a manager at a financial institution and told me that if the bank foreclosed on his home, he would lose his job pursuant to established company policy. We promptly filed a bankruptcy for him and were able to save his home from foreclosure. As it turned out, filing bankruptcy also saved his job because his employer understood that the bankruptcy statutes prevented it from taking adverse employment action. If my client had not filed for bankruptcy, he would have lost his home and his job.