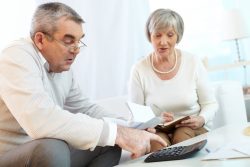 For many seniors, a limited income combined with rising costs of medical expenses and home care, lead to financial hardship and increased debt. Many seniors who are living off of small social security payments or survivors’ benefits will often find they are living beyond their means and dip into their credit to provide short-term relief. More and more seniors are finding themselves in a position of unexpected expenses and a smaller safety net of savings at their disposal.

According to a study completed in August of 2018, which analyzes the demographics of the cases filed prior to 1991 in comparison to the cases filed after 1991, older Americans are filing for bankruptcy more frequently, while there has been a reduction in younger Americans filing.

This increase is attributed to far more than just the aging population. Many adult children provide a safety net to their parents by providing care, transportation, food, and lodging. As families are spreading out geographically and family sizes are on the decline, there are fewer adult children who are able to assist in supplementing the financial needs of their aging parents. In addition, according to the National Council on Aging, the median debt that senior households owe has more than doubled from $18,385 in 2001 to $40,900 in 2013.

Other sources of financial strain for seniors are: student loans that they have personally guaranteed for their children, and their mortgage. Student loans are a source of debt that seniors didn’t have to deal with 20 to 30 years ago. In addition, adults who purchase homes later in life, are still paying mortgages later in life. Mortgage payments and student loans for their children were debts that were previously considered unheard of for the senior population.

For those seniors who are considering bankruptcy, it is important to note that seniors over the age of 65 are entitled to increased exemptions than filers under the age of 65. If you have questions about what bankruptcy can do for your financial peace of mind, please reach out to your Stockton Bankruptcy Attorney.